iOS 7 was a blessing for gamers, as Apple finally added an official API for controllers. There were a few different controllers that were released to meet the demands of mobile gamers, but I’m going to talk about the SteelSeries Stratus.

The Stratus is made of lightweight black or white plastic and features the standard button configuration: four shoulder buttons, four face buttons, a D-pad, and two analog joysticks. It comes with a clear plastic cover that both protects the front of the controller when not in use and snaps to the back of the controller to provide a better grip when in use. The MSRP is $79.99.

The most notable thing about the Stratus is that it’s currently the only one that can be used with an iPad, which is great for games like Monster Hunter Freedom Unite that really like the larger screen. The face buttons and the D-pad feel really nice as well, with a satisfying click every time you press them. (Don’t underestimate that click, by the way. It’s the best way to “feel” the buttons being pressed, which is important when you can’t afford to take your eyes off the screen.) The L1 and R1 buttons have three raised bumps each, to help your fingers locate them quickly. 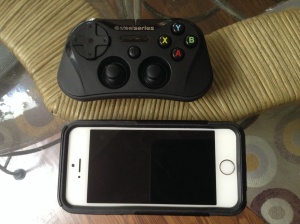 The first thing I noticed is how tiny the Stratus is. As you can see from the photo, it’s about the same width as my iPhone 5S and just a bit shorter in length. To the designers’ credit, it doesn’t feel particularly fragile, but gamers with larger hands may find the placement of the analog sticks to be awkward. In addition, the L2 and R2 buttons are just a bit too awkwardly placed, and some gamers may find themselves accidentally hitting R1 when they meant to hit R2. Battery life is solid, although the device could give better feedback when the battery level is running low. There’s little more unsettling than to have the controller die in the middle of a hunt and have to finish off a Yian Kut-ku with the touch screen.

So should you buy one of these? I say yes, but only if you were planning on purchasing a controller for your iOS device anyway. The price is quite steep, but it’ll pay off in the long run.

Here’s an incomplete list of supported games. If you don’t see your favorite game on that list, ask the developer if controllers are supported or if controller support will be added in the future.

One final thought: Using the second stick for camera control in Monster Hunter is so good, it feels like cheating.